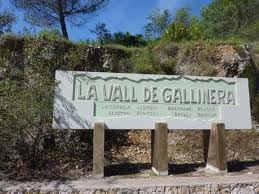 Gallinera (in Valencian, the Gallinera) is a municipality in the Valencian Community, Spain. Located in the northeast of the province of Alicante, in the comarca of Marina Alta. It has 672 inhabitants (INE 2007).

GEOGRAPHY
In this a long valley in the form of running northeast-southwest direction, which has its source and runs Gallinera river, which is surrounded by mountains: the Sierra del Almirante, the Sierra and the Sierra Foradada Albureca.

HISTORY
As in all other inland valleys of the Marina Alta, the Arabs occupied for nearly six centuries these lands. After the expulsion of the Moors (1609), Gallinera was so deserted, that the Duke of Gandia, which included the territory, Mallorca brought 150 families to repopulate the valley. The consequences of this fact, would be counted by the botanist Antonio José de Cavanilles as follows: "Lie to still see the origin of all in the accent and dialect of its inhabitants.'re Very applied to work and live prey all delicious happy in that room. "

MONUMENTS
Benirrama Castle. Was very important in the time of James I.
Strong Islamic. The remains of the fort Islamic Benisili are located on the heights overlooking the Valley of Gallinera.
Ruins of the convent. The ruins of the eighteenth century convent located near Benitaia.